The indexes again climbed higher. Most notably, the SP' fractionally exceeded the recent 1374 peak -forming what could be a double top, although the other indexes are lagging somewhat lower.

There remains no decisive turn lower. With opex this Friday, we could merely trundle sideways into next week. 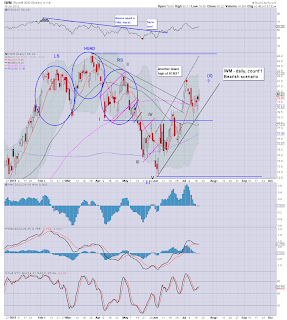 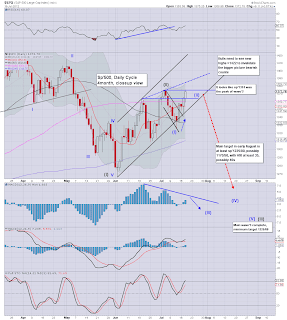 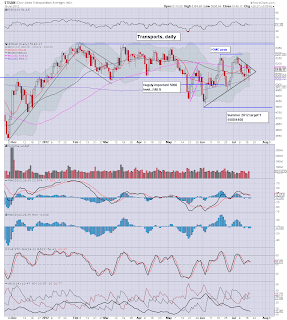 I expect the SP' MACD cycle to have displayed a clear rollover within the next 2 or 3 trading days.

The transports - the old leader, remains very weak, and a move below 5k is expected no later than the end of next week.

First minor target is a break of the current hourly cycle up channel - which will be as high as 1370 at the Friday close. So bears only need a tiny decline to break the trend from the recent up move from 1325.

The second target is a pretty important one...1310/05. That was the old support level/zone that held in late June. A break of this area will open the door to a first attempt to break the June low of 1266.

Bears certainly have a lot of resistance levels to break below, but with the VIX at what is near 100% complacency, and with indexes now 100pts higher than the low from 6 weeks ago..there is pretty good risk/reward for those traders taking new short positions.