Some further good index gains for the bulls today, we had the third consecutive up day. Lets take a look at those daily charts! 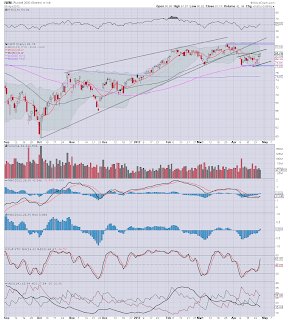 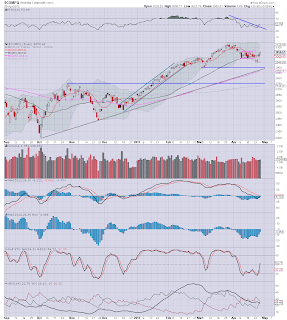 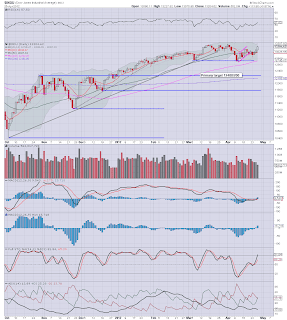 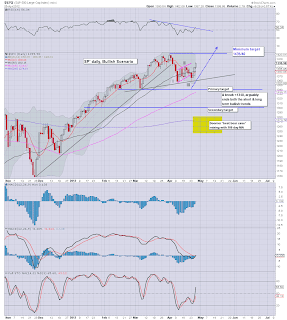 The Rus'2000 remains a real confusing mess. Yes, its had a good bounce from the Monday low, but it remains within a clear bear flag. Only a break over 83/84 would confirm a new trend higher. IWM went positive cycle on the MACD today, it will most likely have some follow through tomorrow.

Dow, Nasdaq Comp, and SP' all similarly showing a reasonable 3 day upside move. Both SP'500 and the Nasdaq are set to go positive cycle on the MACD Friday, so again, there is more likely to be follow through tomorrow than a move lower.

In terms of the SP' bullish scenario chart, - assuming we can break 1405/10 in the next day or two, first target would indeed be at least a moderately higher high, somewhere in the 1430/40 range. Arguably a few consecutive closes over 1450/60 in early May, and then the 'SP'1550 target' would come back into play as the prime target for the summer/2012 peak.


Looking ahead to Friday - GDP

Market consensus is expecting Q1 GDP of +2.5% (compared to Q4 +3.0%). I would guess only a figure under 2.2/2.0 would upset the market enough to threaten the current upward move. Considering Japan is -2.5%, and the EU is also officially in recession (and the UK too!), even a figure of +2% is arguably pretty good.

Yet, we know its primarily due to 'the printer'..aka..the Bernanke. Without all that free money circulating out there, we'd sure not have a positive number.