With US equity indexes closing significantly lower, the VIX was naturally on the rise (intra high 16.77), settling +14.7% @ 16.16. Near term outlook offers the sp'2020/10 zone, and that likely equates to VIX 18s. Sustained action above the key 20 threshold still looks out of range in the current cycle. 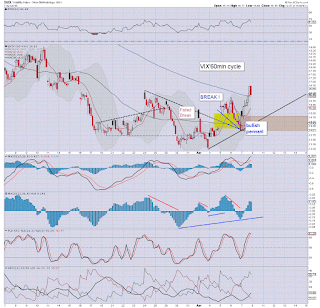 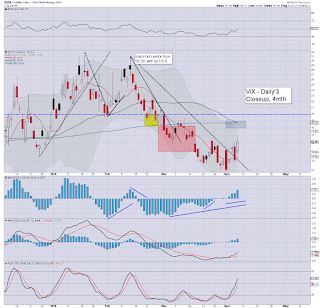 First, it was particularly pleasing to see the VIX bullish pennant play out, along with a corresponding bear flag for equities. They aren't often that clear.

Even another move higher like today, will only get the VIX to the 18s.. where they are multiple aspects of resistance.

Sustained action above the key 20 threshold looks out of range in the current down wave.

Best guess:  VIX 18s.. then cooling to the 15s.. before renewed upside after next Wed/Thursday. The 20s look viable in the latter half of the month.