US equity indexes closed broadly higher for a second consecutive day, sp +13pts @ 2040. The two leaders - Trans/R2K, settled higher by 3.0% and 1.5% respectively. Near term outlook offers the R2K at the 1100 threshold, which will likely equate to sp'2050 before next chance of a reversal. 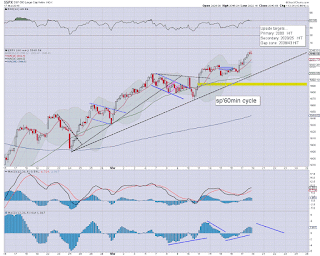 *closing hour action: micro chop, with just a touch of weakness into the close, but absolutely nothing to give clarity of a key mid term top.
--

Higher oil prices is a primary driver, and Oil itself it being helped via a weaker USD.
--

Just reflect on the fact that we're back within 5% of the historic high of May 2015.

Now its a pure case of whether you think...

Thanks for the messages/emails... makes the day far more interesting!