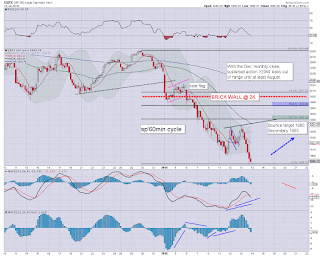 *closing hour action: a vain attempt to re-take the sp'1900 threshold, but failing
--

I have adjusted the fib' retrace on the hourly chart.... but considering the GIANT bearish engulfing candle on the daily cycle... hopes of renewed upside are largely vapourised.

I see ZERO reason to be on the long side, especially holding overnight/across the coming 3 day weekend, as there is HIGH risk of a giant gap lower.

.. and were that the case.. even I would then consider buying.
-