US equities see an early bounce.. but it was fully reversed, with a new cycle low of sp'2006. VIX has not yet confirmed the renewed weakness.. getting stuck with a fractionally lower high of 22.71. USD remains broadly weak, -0.8% in the DXY 95.20s. 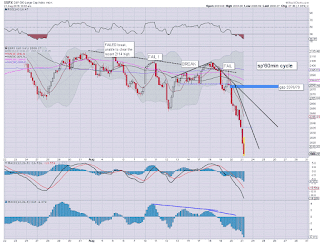 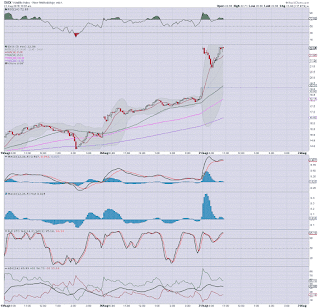 *note the opening black-fail candle on the VIX.. seen even on the nano scale 5min cycle. There is a viable micro double top.. with the bigger 15/60min cycles set to turn lower as the day progresses.
--

Clearly, a daily close in the sp'2040/50 zone looks very difficult right now.. but we're still set to get a bounce.

To be clear though, I am NOT interested in trying to be clever and trade any such anticipated bounces. Overly risky.. in my view.
-

Big picture 'doomer bears' should be more than content, as we've seen another huge set of bearish signals trigger today... and it should give confidence to those wishing to short the next bounce.
--

Personally, the most amusing thing right now is seeing the mainstream get somewhat upset as we've fallen around 5% from the recent highs.
-

We're at typical turn time... there will be underlying natural pressure for a bounce from here to begin.

Considering the sig' downside we've seen since Wed'... there will surely be a lot of bears wanting to close out for the weekend. 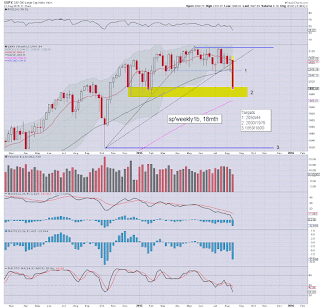 
11.26am.. TWO consecutive days where the broader market is net lower by around 2%....  when was the last time we saw that?  Aug' 2011?
Posted by Trading Sunset at 15:53:00
Email ThisBlogThis!Share to TwitterShare to FacebookShare to Pinterest
Newer Post Older Post Home