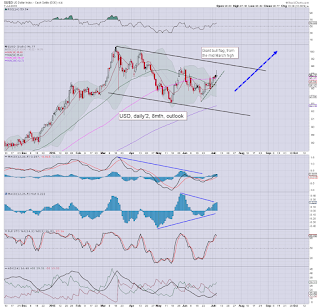 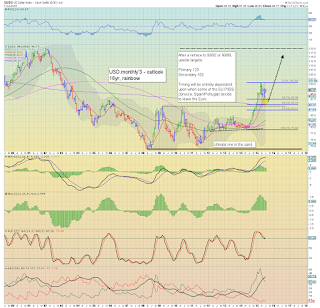 The daily MACD (blue bar histogram) cycle continues to tick higher, and indeed, is now on the high side. A new down cycle looks due.. which (in theory) should see the USD cool into August.

For the 'dollar doomers' out there, I realise you will vehemently disagree, but then.. would you rather hold Yen, Euros... or (eventually)... Drachma instead?

Ohh yeah, some of you are thinking about physical Gold.. or even Bitcoin. Good luck with that.
--

Update from a typically loud Oscar

Wednesday will see the latest EIA oil report, and the FOMC minutes.

*fed official Williams is speaking at 2pm.. and Mr Market will be listening for any chatter on int' rates.. or even the Greek situation.
--