The main indexes are strongly lower, lead by the Trans/R2K, both lower by around 2.25%. The VIX has decisively cleared the strong resistance of 16.56..and the door is now open to the low 20s..at ANY point. Gold and Oil remain strongly higher. 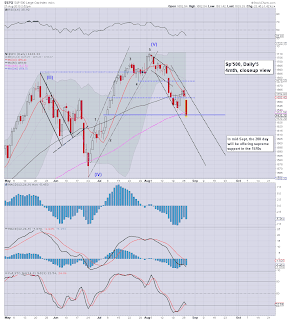 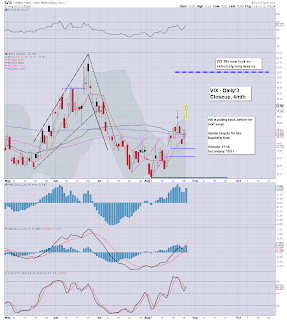 *I have been so overly wrapped up in the smaller cycles, that I've completely failed to be part of ANY of the decline from the sp'1709 high.

Regardless of my own 'lost in the noise' failure, the primary trend remains clearly downward..at least on the bigger daily/weekly charts.

With the increasing war talk, VIX could easily open in the 20s tomorrow, with sp' <1600.


updates into the close....


3.09pm.. So..the question is..who the hell will want to go long into the close for overnight?

Thats right, I didn't think so.
-
Its not like the Syria issue is going to 'improve' now, is it? Its just a matter of a week or so..if not days until the missiles start flying.

VIX 27s however would surely need a break <sp'1560..which would really surprise many.


3.33pm..I sure do NOT like chasing the market, but the targets are pretty clear.

The really BIG issue now is just what happens over the long THREE day weekend?

A Syria attack over the weekend...very likely