The market appears rather confident ahead of the next FOMC announcement. The daily charts have seen price momentum swing almost fully back to the bulls. Baring a 'spooky' fed statement/policy change, this market looks set for sp'1700s within the next few weeks. 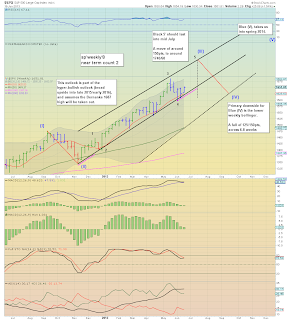 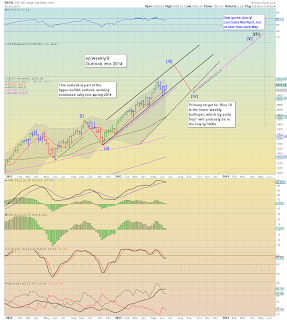 I don't expect anything from the Fed tomorrow that will spook the market. Interest rates aren't going to change, nor is the much touted 'tapering' going to begin. No, it will be surely just be an FOMC statement of nothing.

That certainly doesn't mean the market won't briefly sell lower, but that in itself is again the proverbial 'dip buying opportunity'.
--

The two weekly charts above, remain my 'best guess'. The bigger macro-picture is holding together, despite the underlying western-economic weakness out there. The central banks are still managing to paper over the problems, and with bonds largely unattractive, where else is the money going to go?

I do still expect a mid-size wave lower in Aug/September, but that will probably be all the bears get this year...ironically back to the levels of last week.

All things considered, this market looks set to be testing sp'2000 in spring 2014.

The FOMC announcement is at 2pm, and the Bernanke will be doing a press conference around 2.15/30pm.

We could see some pretty wild price swings, so..for those with trading stops...it could be a very annoying afternoon.

*I'm sitting the current Fed-affected market out until Thursday morning. Of course, if I'm right, the sp' will be in the 1670s by then, at which point a new long position will be...too late. Besides, opex is this Friday.

Arguably, it is a case of 'come back next week', and just buy on the next minor down cycle.

--
I noticed this on ZH, it certainly deserves being highlighted here also...

Kyle Bass, a broad overview of what is coming.
--
Posted by Trading Sunset at 04:00:00
Email ThisBlogThis!Share to TwitterShare to FacebookShare to Pinterest
Newer Post Older Post Home