Today's reversal was very impressive, and for the bears, the first decent down day in over a month. Yet, the weekly index charts are still hugely bullish. The mid-term targets remain unchanged, and it would still appear sub sp'1600s do not look viable any time soon. 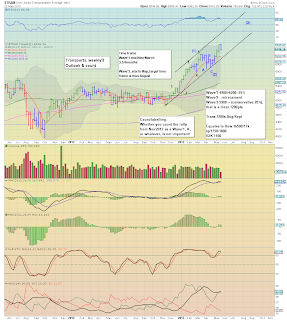 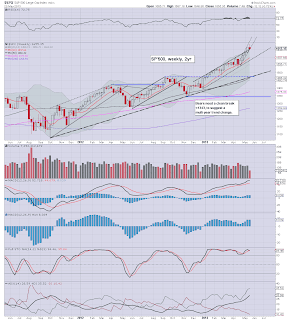 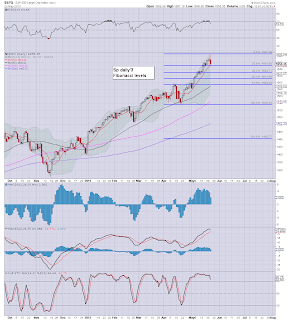 Today was indeed a good day for those who bravely shorted the morning Bernanke ramp. A reversal day is a very important day to recognise, and it is highly probable that we will see some follow through across the next 2-3 trading days.

Best guess, Thursday 'moderate bounce' into late morning, maxing out somewhere in the 1665/70 area. On any basis, a re-short >1665 looks pretty good, and the downside target for late Friday would be 1640..perhaps the low 1630s, the latter of which would equate to at least the VIX 16s.

Transports have strong support @ 6200. That is around 3.5% lower, and might equate to the sp'1630/20s. The rising weekly lower bollinger band on the sp' is 1450, that would normally be the natural downside target I would look for. Yet, the QE-pomo continues most days, and I simply can't see such a multi-week down wave happening.

*Bears should similarly be concerned about the big QEs next Wednesday and Friday. A new rally looks very likely from next Wednesday onward...and to continue across June and July.
--

We have the usual weekly jobs data, but also two pieces of housing data at 9 and 10am. More importantly though, bears should be aware that Thursday is a 3bn QE-pomo day.  All things considered, I think there is one further index-short trade viable, between now and the weekend.