A little micro down wave, but the broad trend is still to the upside today. There is probably a little of the QE money still out there.  Daily cycles are highly suggestive of much lower levels by the Friday close..perhaps as low as 1600/1590s. First things first though...still bouncing. 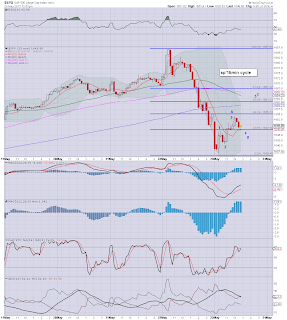 *I've added a vague 2 type count. Impossible to know until near the close.

What does seem fine to target is a hit of sp'1660. There is multiple resistance there, and I think thats where I will start hitting buttons.

UPDATE 1.35pm...the down wave continues, but I still think its a B.

1660 remains viable...but going to need some real kick in the next 60-90 mins.
Posted by Trading Sunset at 17:55:00
Email ThisBlogThis!Share to TwitterShare to FacebookShare to Pinterest
Newer Post Older Post Home