Mr Dollar and the Markets

The US dollar saw its second consecutive day higher, and it was thus surprising to see the equity markets still hold together. If the USD breaks into the 81s early next week, I find it very difficult to imagine equity prices still above the big sp'1400 level. 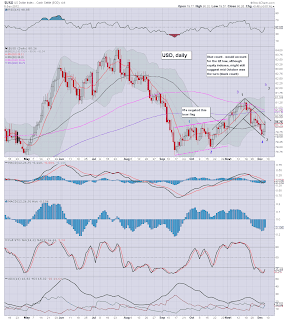 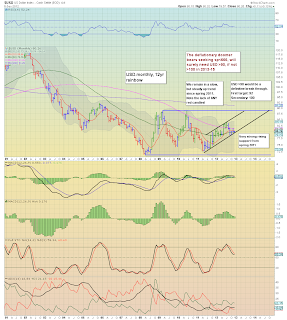 So, two days up for the dollar, and we're back in the low 80s. Yet, only with a break into the 81s can the equity (and commodity) bears start to get excited.

The monthly USD charts offer massive upside to 84/85 in early 2013, but that of course is a mere possibility, and right now, we're still extremely close to the lower rising channel - that now spans almost two years. Indeed a break <77.50 would be extremely bullish for the indexes, and even more so..for WTIC Oil and the precious metals.

As at Monday, the $ rainbow monthly chart candle was red, its now back to blue, and I'm looking for it to flip back to bullish green next week. It will be an important signal to watch for.
--

As for the equity markets, we're on the edge of a breakout. Anything over sp'1423 tomorrow would suggest a challenge of the mid Sept' QE spike high of sp'1474.

The doomer bears need a weekly close <sp'1400, which would really help make up for what has been a very frustrating week in bear land. 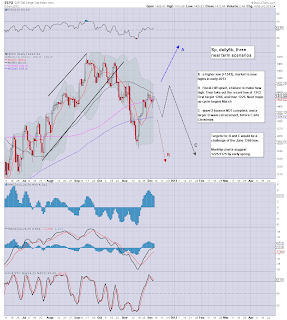 If we break sp'1423 tomorrow, then A' is viable once again, which is a scary thought.

My revised 'best guess' is now C, where we are going to see a minor decline across the next few days - prior to FOMC next Wednesday, but then a final C' wave higher into Christmas.

Scenario B' was always faced with the problem of the seasonal 'Santa rally'. It would appear - based on the price action this week - and the widespread mild hysteria, that B' is now very unlikely. 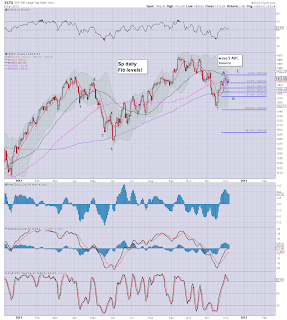 As for Friday, its very difficult to guess. Considering the action in the past few days, it wouldn't surprise me if the market rallied despite 'worse than expected' jobs data, or any data for that matter.

It is frankly, disturbing to see how this market is trading in the past few days. On any basis, it should at least be lurking in the sp'1380s. I shall hope we close tomorrow <sp'1400.