I don't normally cover all the main indexes every day, but since we're close to important trend/channel levels, lets look at all the main six indexes. 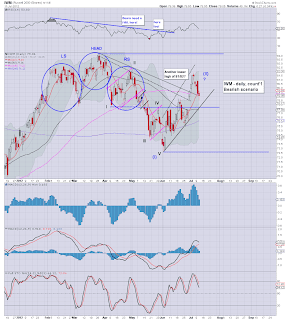 Still the strongest index out there, and not that close to breaking what remains a broad up-channel. 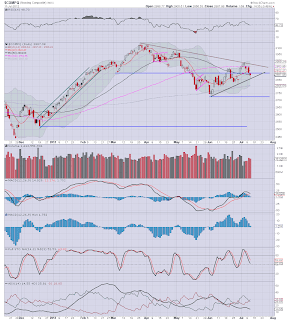 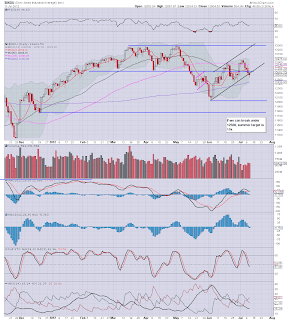 The first index to break the bear flag, next downside target would be the lower bol' line around 12479 - around 130pts lower. 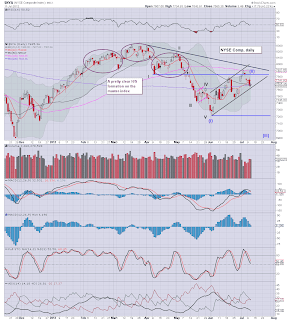 The master index closed comfortably above the lower channel line, and even closed a touch higher! 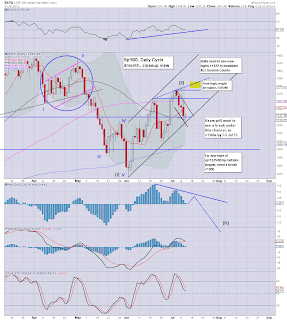 If you look at the MACD (blue bar histogram), maybe we should look for a third - and smaller tower, which might take 3-5 days to form. So, we could be looking at a peak as late as next Tue/Wednesday. 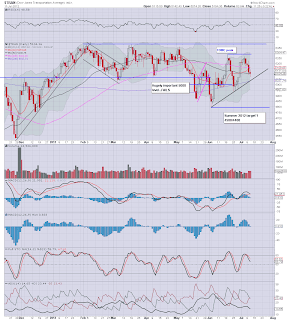 So..the Dow'30 is the first index to break below (and close) under the bear flag/wave'2. Yet, all other indexes are holding over..just.

For the moment, we can still argue that the bear flag is largely intact, and there remains a significant threat of a final (fifth) minor wave higher to around sp'1375/90.

If we somehow gap..or decline lower through the sp'1330 level tomorrow..or Friday, then those bears not already short, will probably have to assume the larger down trend is already underway, and will need to look for their next entry via one of the smaller 15/60min cycles.

Right now, my best guess is that we did 'hold the line' today at 1333, and that we could somehow magically battle our way back upward...and put in a slightly higher high in the 1375/90 zone.

Lets be clear though, I'm still looking for a major move lower, first target 1225/00, although the monthly cycle still calls for sp'1150/00 sometime in the next few months.