2pm update - its all there, black and white, clear as crystal

Okay, well its been an interesting day so far. Things are starting to become a little clearer I believe.

We're seeing pretty strong bounce, and the hourly cycle is VERY suggesting that we could close green. This of course will confuse..and annoy many bears beyond belief.

However, whats important is that we did break the key uptrend - that has held since the June'1266 low. I would argue what we've seen today is the floor of micro-wave'1, that forms part of wave'3. If that is correct, we're set to see a multi-day 2-5 day bounce...but one that puts in a lower high.

I think the following two updated charts clarify what I'm trying to explain... 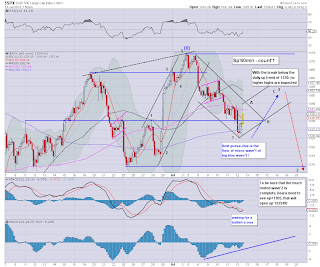 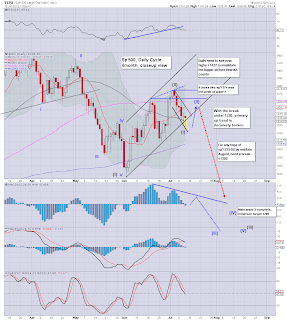 So, I think the floor is in for a few days. I did not chase the market lower at 1330/25, and I no longer think we're going any lower until later next week.

The VIX has FAILED completely to show any serious attempt to push into the kind of area - mid'20s, where I might consider some seriously big down moves in the indexes are viable.

So..I'm sitting it out. I sure won't go long. There is the risk I'm simply wrong, and we'll just flip lower at any point.

For those bulls out there, simple stops at 1324...and those 'big money' bears - who are playing on a multi-month cycle,..can probably tighten any stops to 1375.

JPM results tomorrow, I had considered it a possible short, but not now. If it closes marginally higher, that won't be a good sign for the financial bears tomorrow.
--