To conclude today, lets take a quick look at the Greek stock market. Also keep in mind that both Spanish and Italian indexes are following right behind. 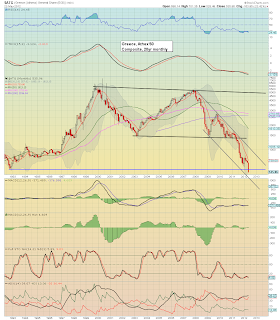 With an eventual exit from the Euro seemingly assured, and a number of 'depression' years yet to pass, the Greek market will probably lose around 99% of its 2007 value.

For those outside of Greece, at some point, there will be some real bargains to be had. I personally know nothing of what Greece actually makes these days. Aside from the tourist industry, just what do they do with themselves?

Here is one link to maybe bookmark for the years ahead. Eventually, it might be worth doing some serious in-depth stock research for some of these Greek companies

--
Well, it sure was an interesting and choppy Tuesday. Bulls will need to see a decent move higher this Wednesday. We've an EU meeting, so lets see if that leads to some hyper-bullish ramps across the European and US markets.