Urghh...what a week, what a month! So....the bulls were faked from Monday-Tuesday early afternoon. Whilst the Dow broke out of the down channel, other indexes were somewhat weaker. Someone had even pointed out to me the weakness in the Rus'2000 index. I was too dismissive, and clearly should have been bailing out of index-longs yesterday afternoon. 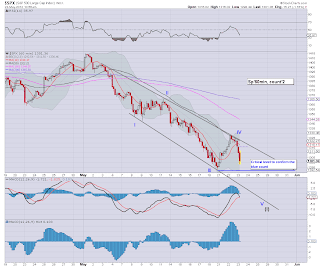 The above count is partly inspired by none other than Daneric (see chartists links). It assumes 5 waves down, forming minor wave'1 down - of what should be a bigger decline to what I believe will be around sp'1100.

The monthly charts have been warning of trouble for weeks of course, and the world indexes continue to warn of declines of around 30% in many indexes from current levels.