Another weak close for the US markets, but it sure was one chop fest of a day. I had really wanted to take a long-trade no less than three times, but the VIX never looked right, and each intra-day rally on the indexes only lasted an hour or so before rolling over.

So we have a very weak market, and the daily outlooks are looking fine for sp'1270 in the near term. I can't work out if we have even had wave'2 (black count) yet. If not, then this is one hell of a strong wave'1 down - and would bode for a really scary wave'3 - probably to the 1200/1150 zone by late June. 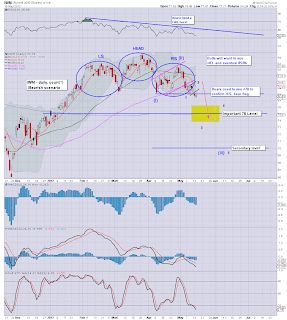 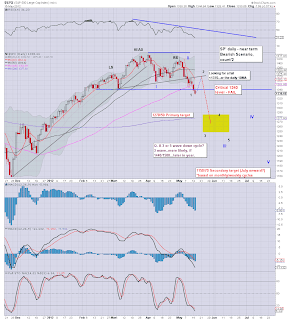 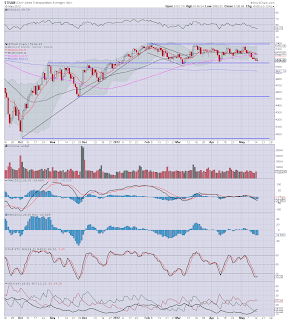 Transports remains stuck in that incredibly tight range. The Tranny is a mere day from breaking through key support - which would be the ultimate warning to the bulls.

Both the SP'500/IWM bearish outlook charts are looking good.

I don't know, and its one reason why I am both fearful to go long - even for day-trades, and also too worried to be holding short overnight from these levels. The fact that is it opex week - along with the crazy Facebook nonsense/hysteria IPO this Friday, just adds to the problem of what to do.

Personally, as noted earlier today, I will be VERY much more clear minded and feel more able to trade once we move into next week.
Posted by Trading Sunset at 00:00:00
Email ThisBlogThis!Share to TwitterShare to FacebookShare to Pinterest
Newer Post Older Post Home