Looks like we're rolling over again, into the close and FOMC Wednesday. 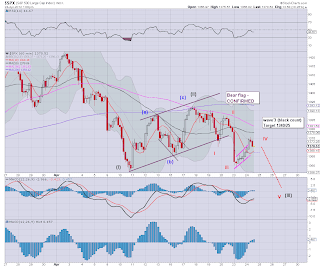 *most of important right now for the bears, need to see a break and close under the 10MA, sp'1368

Nothing much to add from earlier. Suffice to say, I'm still looking for sp'1340s, which right now, would make for a final wave'5..and then we go UP. The count though, it just doesn't seem right, after all, we only snapped lower yesterday, so today is day'2. I suppose if we hit 1340 early Thursday, that'd count as day'4 in a wave3, that'd just about be long enough in terms of time.