US equities open moderately higher for the fifth consecutive trading day, but with the indexes already turning fractionally negative. From a cyclical perspective, there is inclination to the upside to an initial target of sp'1960, with a time frame of next Wed/Thursday. Broadly though, this market remains unquestionably broken. 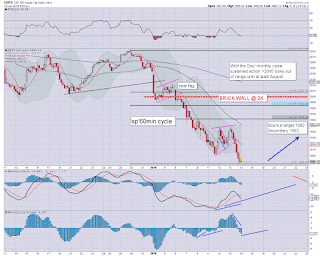 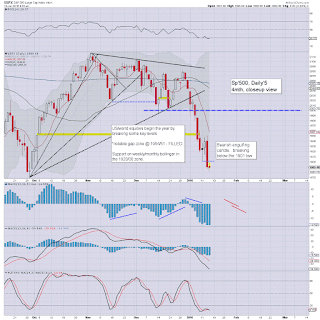 *I wanted to highlight the daily chart already, since I think many are overlooking yesterday's powerfully bearish engulfing candle. Typically, that would bode for much lower levels in the immediate term.
--

Comments from the ECB and Fed official Bullard are helping calm things though, as there are some rumours/chatter of more QE and extended easing. Same old nonsense, right?

How could anyone not consider that if sp'1600s this spring/early summer, the Fed would not seriously consider spooling up the printers once again?
-

Best guess... equities to rally to 1960, but to be clear... I see ZERO reason to play the long side, as the default trade is to the short side.

If I miss further downside, I can live with that. At least I'm not long... on leverage!
--

VIX -6% in the 23s. I'd really prefer to go long VIX from the 18/17s
Posted by Trading Sunset at 14:52:00
Email ThisBlogThis!Share to TwitterShare to FacebookShare to Pinterest
Newer Post Older Post Home