Regardless of the exact close, all US equity indexes are set for very significant net weekly declines. Amusingly, the mainstream are already spooked, with talk that the Fed will now call off a rate rise until spring 2016. Ironically, a failure to raise rates will merely increase uncertainty in world capital markets, with the Aug' lows then becoming vulnerable. 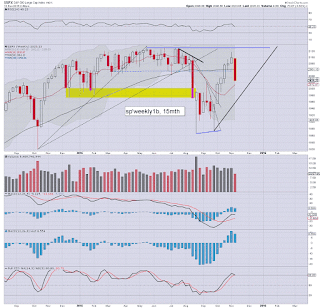 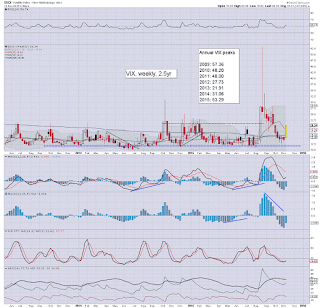 *VIX is set for a powerful net weekly gain... the weekly cycle is offering the 25/30 zone... although I find anything >25 simply unlikely in the current down wave.
--

Clearly, sentiment is still weak... and there is obviously the issue of 'who wants to go long into the weekend?'.

It has unquestionably been a week for the equity bears. 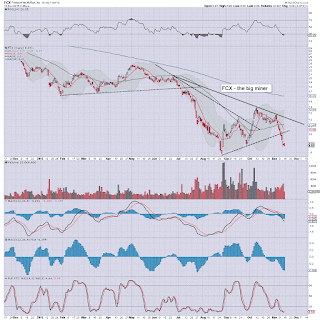 Significantly lower for the 8th consecutive day, with the Dec' 2008 low of $6.29 looking vulnerable. 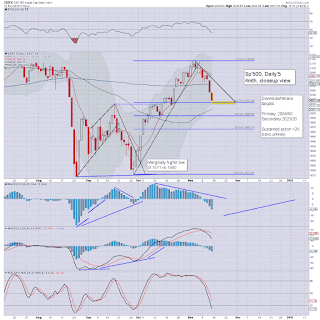 An effective hit of the key fib' retrace.  MACD (blue bar histogram) cycle is getting close to the low side... we ain't likely going lower after next Tue/Wed.

Hard to call the close.. as there will be threat of some bears closing out for the weekend, which would give prices into the weekend, a micro spike higher.

notable strength: GDX +1.2%... which is rather impressive considering the broader market, and with Gold -$2
-


3.38pm.. chop chop.. in the sp'2020s.   VIX hits a new high of 20.67.... but in grand scheme of things.. its a lame level relative to Aug/Sept.
Posted by Trading Sunset at 19:51:00
Email ThisBlogThis!Share to TwitterShare to FacebookShare to Pinterest
Newer Post Older Post Home