Despite another day where the US Govt' is partly shut, the US capital markets remain relatively calm. The sp' weekly charts remain within a starkly strong upward trend from the Oct'2011 low of 1074. Near term upside target remains sp'1750/75, so long as 1675 is not broken below. 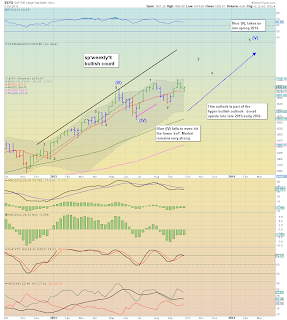 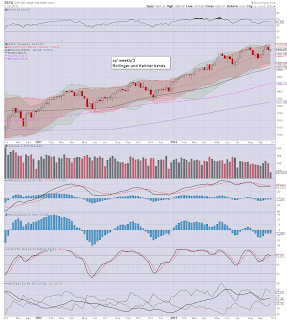 There isn't much to say about today, which was almost a carbon copy replay of Tuesday. We even saw another little micro-ramp into the close..as I expected.
--


Are the political maniacs really that stupid?

Without getting into all the dirty, petty, and outright dumb ass stupidity of the US politicians, having noted the latest Obama/Boehner developments this evening, I'm even more disgusted with them than usual.

It would seem even Obama was subtly referencing the July/August market cliff fall of 2011 in the CNBC interview this afternoon. Further, it is always bizarre to see some leader claim credit for a higher stock market, as if that is 1. a good thing.  2. actually reflective of the economy.


Many out there (not least on Zerohedge) are again highlighting the price action of summer 2011. Yet, from a technical point of view, the recent price action is NOT the same. In summer 2011 the market had already put in a significant multi-week down wave, and QE had ended earlier in May. 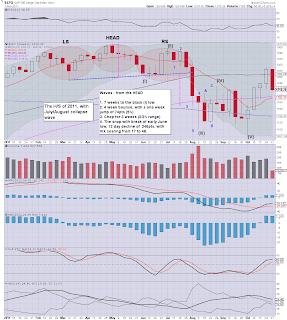 As I regularly note, in the last two down cycles of June and August, bears were weak, and couldn't even knock the market down to the lower weekly bollinger - which in both cases wasn't that far down anyway.

So..from a purely chart perspective, the cycles of 2013/11 are not especially comparable. The news/events are somewhat similar, but then...unlike summer 2011...we have ongoing monthly QE of $85bn.

All things considered, I'm still guessing some political compromise will be reached. However..lets be clear..if not..and the debt ceiling is failed to be raised in time...this market is going to cliff fall. Lets just say, I think its important to keep in mind the circuit breakers kick in on a daily drop of 7%, 13%, and the market is shut for the day on any 20% drop. See NYSE for details.

The usual weekly jobs data will probably not appear due to the govt' shutdown. There are factory orders/ISM non-manu' data, which I guess will be released.

*the next sig' QE-pomo is not until next Monday.
--

More than anything, the clearest aspect of the current market is that the bears simply lack downside power. This morning was yet another classic example, with opening moderate declines of around 0.75-1% on the indexes, only to be largely recovered by the close.

As ever..one day at a time, but so long as the market does not break the Monday low of 1674.99, those on the long side can remain quietly confident.
-

Video update from Gordon T Long, on the Fed decision to not taper QE.