The market remains very quiet, and despite a lack of QE, the bears are still unable to even manage a moderate decline. The weekly charts look set to close the week positive for all indexes, not surprisingly, lead by the Transports, with gains of around 2.5% 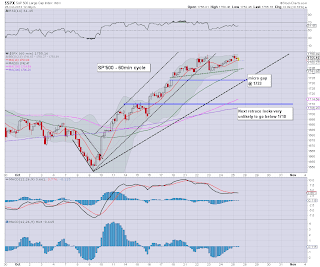 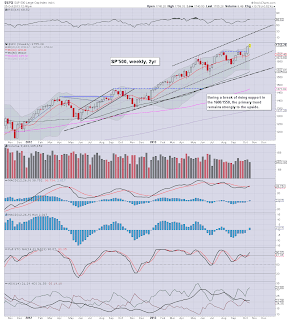 There is little to add, on what has turned out to be a very subdued day. Rather than see a minor down wave, the market is merely churning flat to fractionally higher.

Attention is already shifting to the FOMC of next Wednesday. I think I've seen all the bases covered this week. A few suggestive QE to be cut....whilst one even offered an increase. Consensus is most definitely one of QE to remain $85bn until March..if not next summer.

Effectively...QE without end....but hey, isn't that why we called it QE infinity to begin with? Duh!
--

AMZN is holding powerful gains of 8%..and the $400s look viable...which of course is a simply insane valuation. Annual sales of $70bn or so..and they still can't make a profit.
Posted by Trading Sunset at 17:58:00
Email ThisBlogThis!Share to TwitterShare to FacebookShare to Pinterest
Newer Post Older Post Home