The market looks set for minor price chop for the rest of this week, but things should get more dynamic in the latter half of August. So long as the sp'1709 high holds, bears should have some good short-side opportunities in the weeks ahead. 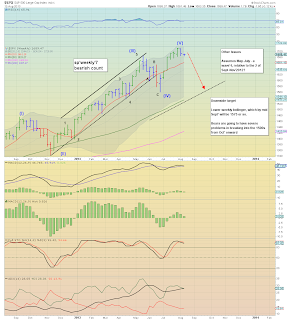 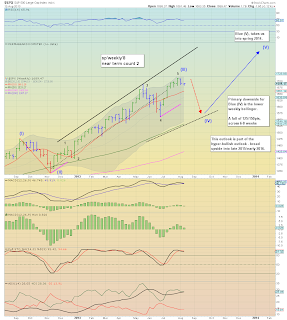 To start the week, we have our second blue candle on the 'rainbow' weekly charts. Certainly, we could see another 2-4 blue candles, before any significant downside in September. Most previous multi-week down cycles usually take a good month or two to solidify a top.

As for chart'8, yes..that remains the more 'balanced' best guess. I'm sure not liking the idea of a rally all the way into spring 2014, but baring a FULL end to QE-pomo, the market does look set for much higher levels.

There is a viable scenario where a Blue V wave (or however you want to count it), might put in a lower high in late Sept/October, but for now..that is a mere 'distant hope'.

The downside target in the next multi-week down wave remains the lower weekly bollinger...currently @ 1544..but rising each and every day. By mid/late September, bears are going to face a wall in the sp'1600/1575 zone.

So...I remain on the sidelines (having bailed at the Monday open of sp'1684), and will be seeking an index re-short, possibly this Thur/Friday, but maybe as late as next Monday. I'm in no hurry, whilst volatility remains this low.