The market is holding flat, whilst the smaller 5/15min cycles are resetting. A further wave higher into the close to sp'1673/75....appears easily viable. There are simply no sellers out there, and why would there be ? The Bernanke is out there..every day...'inspiring' things. 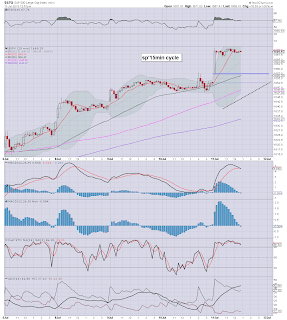 Look at the MACD (blue bar histogram) cycle, its around 60/70% reset already, and looks set to rally higher into the close.

Bears are absolutely obliterated again, and those sp'1700s don't look far away now. 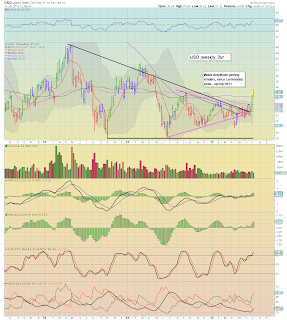 Ironically, I've been 7/8 'good' on USO trades recently, why wasn't I going long a few weeks ago, not least with all the bullish oil charts I was posting? Urghhh !


As for the metals, both are sharply higher, ...but they are still probably just building yet another bear flag. Weekly/monthly charts look..dire
Posted by Trading Sunset at 17:58:00
Email ThisBlogThis!Share to TwitterShare to FacebookShare to Pinterest
Newer Post Older Post Home