The market is now split in two. The Dow and SP' have broken to new highs, yet the two leading market indexes - Transports and Rus'2000, are both still considerably below their recent highs. Considering they lead the way up, traders should be very mindful of those two laggards. 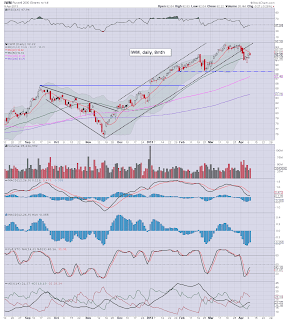 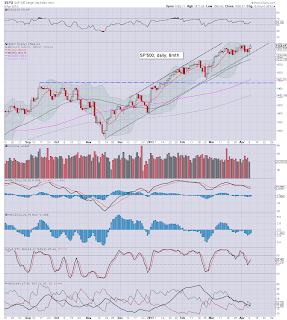 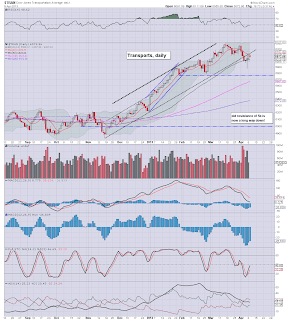 What can we make of today?

The Dow unquestionably broke to a new high, whereas the SP' merely put in a fractionally higher high..which in itself is arguably a double top formation.

Meanwhile, the two main powerful bullish leaders from winter 2012 - Transports and Rus'2000 are still well below their highs.

I have to place more respect in those indexes that lead the way higher, than the more media/mainstream indexes of the Dow, SP, and even the Nasdaq - although the latter is ironically the biggest laggard of all.

Underlying MACD (blue bar histogram) ticked higher again - to be expected, but is still in negative territory. Bulls need to keep pushing here, or the snap lower could be fierce.

As I noted last evening, if what we are seeing is a mini-H/S formation, then it is suggesting we'll be trading in the sp'1505/00 zone within the very near term..and other daily charts support the idea of sp'1480/70s within a few weeks.