Good morning. With the FOMC minutes being released early, bulls are getting an early boost. After all, there is again no sign that QE will end. The sp' breaks the Oct'2007 high of 1576.09, by the narrowest margin of 0.01pts. Precious metals and Oil open somewhat weak. 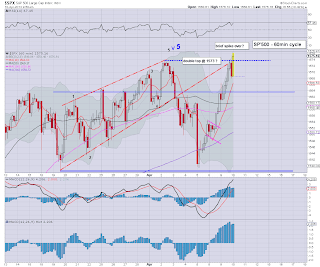 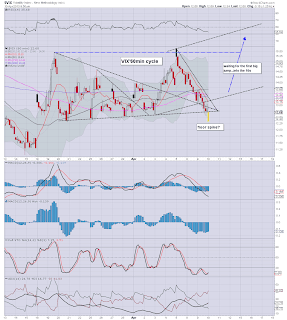 Its difficult what to make of the current action. I suppose you could call it 'bear capitulation', but what is clear, we ain't down.

The only indexes that still count well are Trans and the R2K.

I suppose some might count the recent drop as a sub' wave'4, and this is the 'final fifth', but who knows. Its frankly,,getting messy.
--

The transports and Rus'2000 continue to remain well below their recent highs, but I'm starting to wonder if this disconnect is not something that might last weeks..rather than just a few days.

As many realise, we could trundle sideways or slightly higher for much of April. May remains the primary month for significant downside, and even then, how is that going to happen whilst QE-POMO is continuing?
--

I suppose the one thing bears no longer need be concerned about later today, is what those printing maniacs at the Fed have to say.

In fact, if you look at the daily MACD (blue bar histogram) cycle, its not even positive cycle yet..and could easily battle higher for another few days. 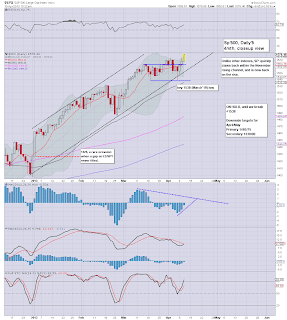 So, all those who were touting sp'1600s before a significant pull back...it looks like they were right after all. 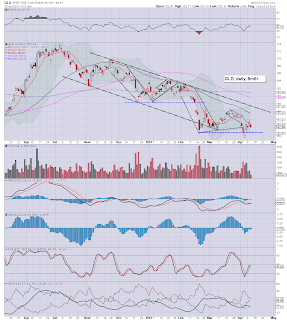 SLV is even worse of course, always moving 2x the amount of GLD
Posted by Permabear Doomster at 14:52:00
Email ThisBlogThis!Share to TwitterShare to FacebookShare to Pinterest
Newer Post Older Post Home