The main indexes saw a very strong morning reversal, and closed around 0.75% higher. Today's low was probably the B' wave of an ABC formation, that constitutes the wave'2 bounce that was expected from the recent sp'1343 low. Despite the bullish hysteria out there, I find it near impossible to conceive of sp'1440s any time soon. 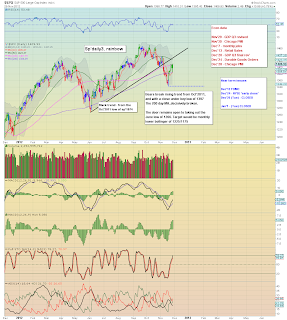 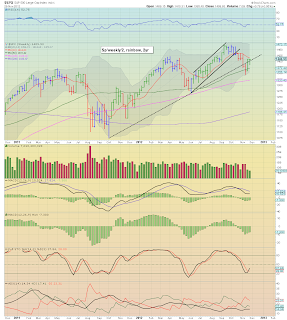 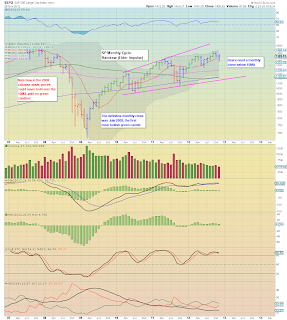 The daily and weekly rainbow charts are both green, but there is of course considerable technical damage from the recent wave'1 decline. I'm still guessing this current bounce doesn't get any higher than the mid sp'1420s, where the 50 day MA is lurking @ 1423

Looking ahead into tomorrow, we have GDP Q3 'first revision' data, where market is expecting 2.8%, after the initial 'guess' of 2.0%. However, I'm more looking towards the Chicago PMI data on Friday.

I would REALLY want to see at least a blue candle on the monthly rainbow index charts. So, I probably need a close at least <1410 by this Friday close - which is the end of the trading month.

That would allow for a giant red candle in December, on the next attempt to break lower - via a wave'3 decline into the 1200s.
--

Well, today was a bit of a twisted trading day, I'm sure Thursday will be at least 'marginally' simpler :).