Despite continued weakness in the indexes for a seventh day the VIX remains very low, closing effectively flat, and rest @ 17.99 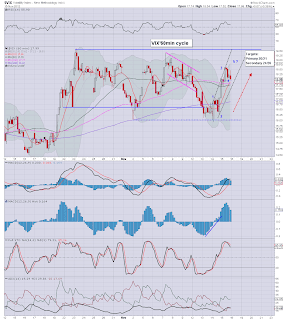 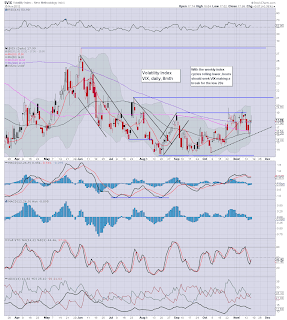 The price action of the VIX in the past two days is suggestive of a 5 wave move. Whether we've had a truncated fifth this afternoon, that's too hard to guess. Even if we've still to have a fifth wave higher early Friday, it won't likely be very much, and thus the indexes will probably be free to start a rally into next Monday.

It has to be said, the VIX action of the past few weeks has been truly strange. I won't even waste keystrokes on any of the somewhat more kooky theories out there, but suffice to say..the VIX is not properly reflecting what is going on with the price action of the equity indexes.

I realise the VIX itself is a mere calculation of option prices, but still....something sure seems 'off'.
---

I don't expect VIX to break >20 for at least another trading week. Perhaps we'll see the much awaited VIX explosion in late Nov/early December?

For the near term, it just seems like Mr Market is still tightly holding onto the bullish hysteria of the past four years.

Eventually...the delusion will break...Mr Market will awaken, and then we will indeed the VIX explode into the 20s.and far beyond.
Posted by Permabear Doomster at 23:00:00
Email ThisBlogThis!Share to TwitterShare to FacebookShare to Pinterest
Newer Post Older Post Home