We're a mere 20 pts from the April peak.

This is the thing that gets me about the chartists - especially the elliot wavers, if we do hit 1423, that invalidates EVERYTHING they've said since April. All that talk of 'ohh, its a wave'1' etc, it will all have to be thrown into the trash bin

But no, they won't admit that, they can't.

There remain only a few who are suggesting a marginally lower high  <1422 in the near term, before a major move lower. As it is, with the monthly cycle now outright bullish, its hard to argue that 1422 won't be broken. 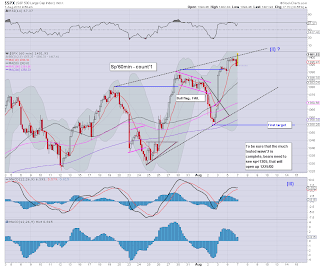 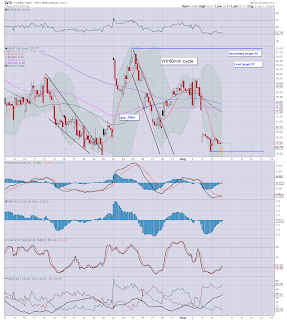 VIX is putting in a reversal candle, but they've not been particularly reliable lately.

Bulls are very close to removing the last set of bear stops at the 1422 peak. Just one more big up day, and we're back into a massively strong market (volume has been irrelevant since summer 2009) with QE yet to come.