Just consider for a moment the greater 'issues' out there right now. The indebted EU (ohh, and USA too), the looming 'US might slip into a recession by Q4', and the next earnings season which many recognise will probably showed distinct weakness in most sectors of the economy.

Then there was the crazy issue that the mere news wire headline of Merkel cancelling a Thursday evening press conference, started a hyper ramp from sp'1313 to 1362 in just 7 trading hours. This is one crazy market, and yet volatility as such remains very low.

The daily 'rainbow' - (Elder impulse) chart shows no sign of a turn even starting yet.  Volatility looks set to remain flat until at least Friday. 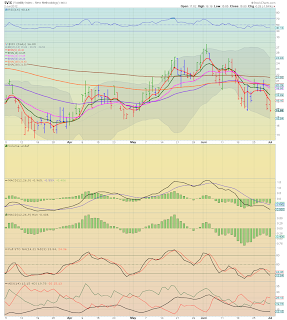 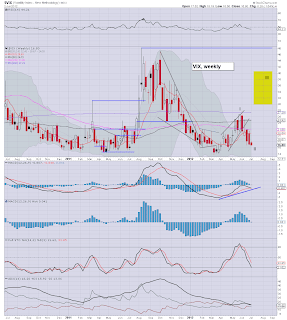 Unless the market can break to new index highs of sp>1422 in the weeks and months ahead, I will continue to seek a VIX exploding into the 30s..and 40s.

From an options trader perspective, so long as the VIX calls have at least a few months on the detonator clock, a long VIX trade should be pretty good from these levels.

Although from a weekly cycle, there is as yet... NO sign of a turn higher..and the more conservative bears will be waiting until at least next week.
Posted by Trading Sunset at 22:30:00
Email ThisBlogThis!Share to TwitterShare to FacebookShare to Pinterest
Newer Post Older Post Home