Whilst the market churns today...I'll keep on throwing out those more important bigger picture charts.... 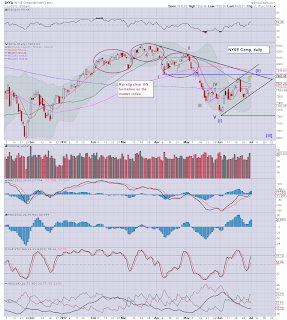 I really like this chart. You can see the H/S formation..which broke lower, then a bear flag..and finally flooring (with sp'1266) in early June.

We are still arguably very much within the tolerable range of a wave'2. A wave'3 by definition should at least take the market down to around sp'1225/00.

If this lunacy (since Thursday 3pm) can indeed level out at current levels, that outlook is still viable later this month. 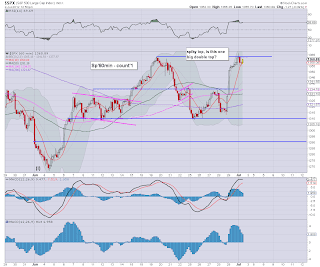 A close under 1363 would be useful for the bears today, but I'm really not expecting anything moderately bearish until at least Thursday.

I suppose we could be putting in a double top - although Rus'2000 was well above equivilent levels on Friday, we'll probably know for sure by Friday.
--

*Special note.
The NYSE will close early tomorrow at 1pm.

More later..on this rainy afternoon in London (at least Wimbledon has a roof now)
Posted by Trading Sunset at 17:55:00
Email ThisBlogThis!Share to TwitterShare to FacebookShare to Pinterest
Newer Post Older Post Home