With the latest ISM manufacturing data posting a sub 50 number (aka, contraction), the market is again getting a reminder that the US economy is slipping back towards a recession. As I noted at the weekend, its likely than a recession won't be officially recognised until the GDP Q4'2012 data is released in April'2013. Even then, the rule is 'two quarters of negative growth', so, that'd make no official 'US recession' until late July 2013 !

So, we're probably still at least ten months until the 'mainstream' will begin to accept the reality.

Meanwhile, Japan, the UK, and the wider EU are already in recession. The USA will not be immune. 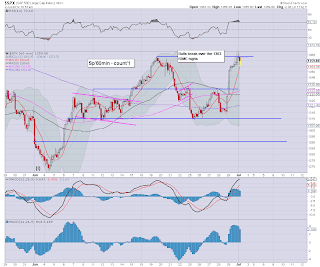 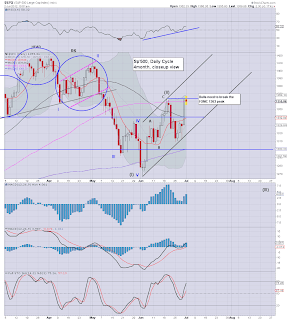 First target for the bears is the hourly 10MA of sp'1354. A close under the 10MA is probably the best the bears can hope for today, considering the daily cycle is still strongly positive.

As ever, good reading on the ISM data at Zerohedge.

Over the weekend there were quite a few touting a double top on the daily index cycle. That is still one viable outcome since the nonsense started last Thursday afternoon.

As it is, most 'bears' would probably do better to just wait until after the holiday.