To end the week...lets close with a reminder on the broader doomster outlook. There remain many unknowns in this outlook. Not least of which is 'will there be 3 waves down..or 5', and 'when will the printing maniac appear?'. 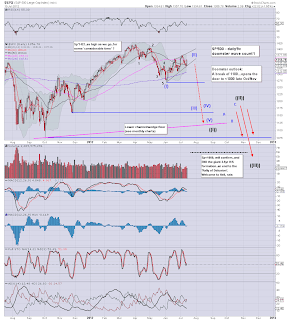 The primary target remains the sp'1150/00 zone, as based on the big picture monthly cycle charts.

Whether that final low is achieved in August..or takes until October is very hard to guess. Much will be dependent upon the actions of the Fed. The Fed though is always reactive, they NEVER pre-empt, so I'm inclined to believe there will NOT be QE3 at the next FOMC - Wed' August'1st.

Then there is the issue of whether sp'1100s will be the floor for the 2012, or if some 'scary downside' is ahead in October/November.  If the market is destined to collapse later this year, then I'd guess we'll see no sign of the Bernanke until after the down cycle is completed, when ever that might be.


A good week ahead

I am very pleased with this week, it is good to be on the sidelines across the weekend, and I will be looking for a major re-short sometime next week - maybe as early as Tuesday.

Have a good weekend....I'll do a weekly cycle update later on Saturday.