3pm update - place your bets for the last hour

The closing hour, and it looks like we'll close within the bear flag I noted in the last hour. A close under the hourly 10MA of 1359 should be considered 'enough' for the bears.

The weekly index charts - if we close at these levels, will all look bearish for next week.

Yet..the VIX is still failing to confirm the declines, and that remains my primary concern. 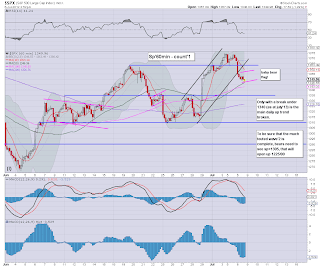 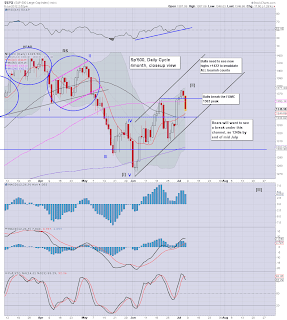 So...bears want to see at least a close no higher than 1357/59, anything under that would be at least something useful to end the week. A moderately 'green' VIX will also be important.

What is clear today, the 80k jobs data is not good for the bulls to claim 'good growth', but neither is it dire enough to assure them of QE3 in August. Besides, the Bernanke can't possibly do QE with the markets a mere 4% from the recent highs.

More after the close
--

So I'm shorting within the mid-range of the baby bear flag...first target is the lower channel on the daily cycle of 1335/30 by Mon/Tue
Posted by Permabear Doomster at 19:55:00
Email ThisBlogThis!Share to TwitterShare to FacebookShare to Pinterest
Newer Post Older Post Home