World Indexes - on the edge of collapse

To end the day, lets look at the world indexes, via the VEU (Vanguard FTSE) chart. I've added a new daily version of the same chart, I think it will become very useful in the days ahead. 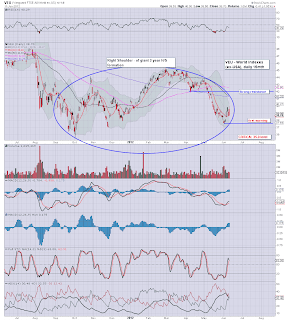 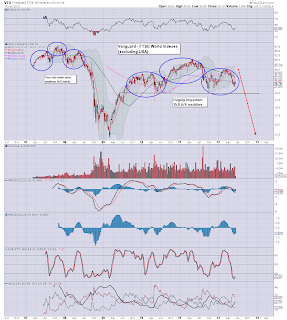 *near term upside target is now 40.50/41, as based on both the daily and weekly charts.

So..to any permabulls out there.....go stare at the two charts for an hour...and then ask yourself the following question...

Which part of this global equity market do you see as bullish since the May'2011 peak?
--

Any non-deluded person should see the weekly chart for exactly what it is, it is the biggest of warnings that a secondary deflationary collapse wave - in the same style as 2008, is imminently due.

The warning levels are clear.


Projections if 35.0 fails to hold

I'd assume 27.50...which is 20% lower across global markets. This would equate to around sp'1100 - which is of course my monthly cycle target. The US indexes tend to be stronger than the world indexes...and so 1100 would be a little less than 20%..but would be very much in sync with the overall outlook.

25.00/23.50 - that would probably equate to sp'950/850. That would make for a very severe drop, and would surely lead to Bernanke - and his little friends around the world, spooling up the digital printers.


Beware of the Hysterical Maniacs

Across the weekend I've seen a lot of hysteria talk again across many news sites, about how the jobless rate is fine at 8%, about how the EU could never possibly implode, just more of the usual deluded talk from the permabulls. Those same deluded maniacs argued Greece would NEVER need a bailout, and that it would be utterly impossible to consider any possibility of anyone leaving the Euro. Hell, I'm sure some of them would still claim Greece never received a bailout!

Yet..here we are...just days away from a Greek election where the winners might decide to not only default on all their sovereign debt, but quit both the Euro, and the European Union itself. A long hard summer lies ahead for those who still don't want to see the reality.