12pm update - the trend is clear

A lot of traders are getting overly wrapped up in the hysteria talk about the coming Greek election weekend. I see other traders shorting at these levels..urghh. I guess they might get lucky, but the daily chart sure says 'hell no!..don't short yet'. 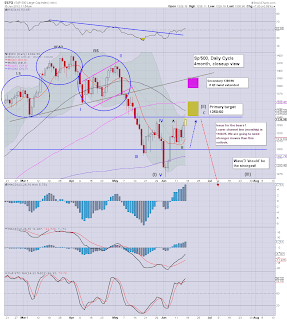 Just look at the daily 10MA (the red line!). With the snap higher last Wednesday June'6th, that was our first proper buy signal. Even the size of that candle was a huge warning to the bears to close any remaining positions.

Arguably, only with a break below sp'1313 do we have an initial sell signal, and even then I'd be reluctant ahead of the Fed next Wednesday.

The trend IS clear, we're headed up in the near term, no matter how sickening that is to the many doomers out there, and those bearish traders who are shorting today 'hoping' for a major gap lower on Monday.

A close today over 1340 would be a bonus to the bulls, its certainly not necessary though. Even a minor red close would be fine.

Ironically, it looks again like what was initially a seemingly very bearish news event, will end with the market gapping higher on Monday morning. I sympathise with those bears who are short right now, but they are currently fighting the trend.
Posted by Trading Sunset at 16:56:00
Email ThisBlogThis!Share to TwitterShare to FacebookShare to Pinterest
Newer Post Older Post Home