Today has made things a little more interesting. Yesterdays stupid JPM inspired ramp really dismayed even the most perma of bears. Even talk of AAPL to $1000 seemed almost everywhere. Is this a sentiment hysteria peak, just like May 2011, or April 2010? 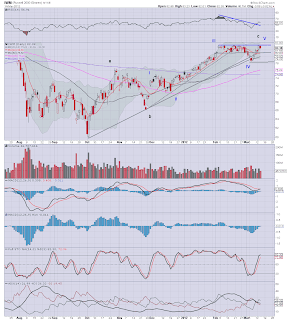 The R2K index is a real mess. We are still stuck at recent highs. Today's close was pretty bearish, but in the scheme of things, its not enough to get excited about.

Bears MUST see IWM fall under 78 to confirm that some sort of short term top is in. Right now, 78 is still a full 4pts lower - that is around 5% off the index. Considering the low vol' melt-up that we're still in, a 5% fall (just to have a chance at further falls) is asking a lot. 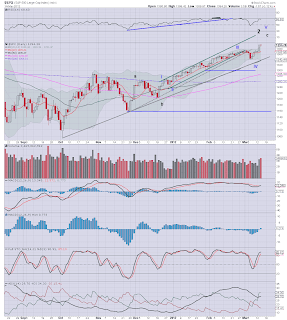 SP', along with the DOW, and Nasdaq have all put in higher highs this week. Would that make for a minor'5 wave complete? It is very confusing, not least when both Transports and the R2K - both important leaders, are very much suggesting underlying weakness.

Right now, only with a close under the recent low of 1340, can the bears get excited for late March and into April. The 1340 level certainly looks a long way down right now. 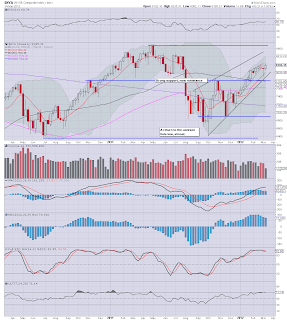 Bears need a break under 8000, and a further move under the October channel/trend of 7900. Even then, there is very strong support at the 7800 level.

With opex this Friday, things could - and should, get more choppy in the remaining part of the week. Where will the marker makers want to pin the indexes? How about sp'1370. That is the 10MA, it'd make for a reasonable pull back, and would leave both bulls and bears alike wondering what is in store for next week. A Friday VIX close of around 17.50/18 would similarly be at a level which would maximise trader uncertainty.