The Dollar is most definitely rising, it is kinda strange that few commentators out there seem to have noticed. 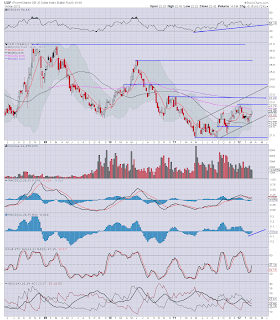 UUP is one great way to play the $. Its a very slow moving ETF, non-leveraged, so at least it does not suffer too much from statistical decay.

*in the grander picture, it is important to note we could easily just be putting in a giant bear flag on the dollar. Unless we can punch through, say above the UUP 23.50 level, the overall outlook could still be said to be bearish.


Implications for the Metals...and the miners

If the near term (1-3 month) UUP outlook is correct, then both metals and miners will be under SEVERE pressure in the coming weeks and maybe across much of the summer.

GLD - on the edge 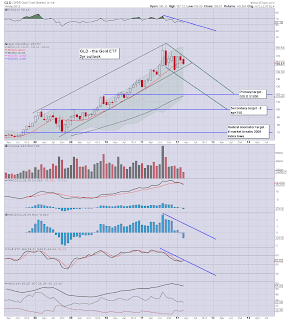 It could be said GLD is merely in a bull flag - which would be true, however, it looks like todays action is suggesting GLD will challenge the 150 level. If that fails..then 140...and then 120 - within months. 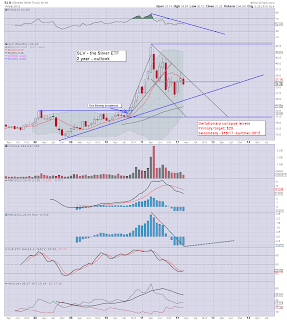 SLV is - as usual, weaker than Gold. Despite the fact that underlying momentum looks like it has turned, it is still deeply in negative territory, and it'll likely take all of 2012 to get close to going positive cycle again.


The Miners are in serious trouble

GDX - Daily, about to break support 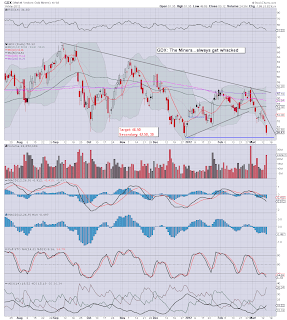 GDX daily chart is arguably oversold, but it is now on the edge of breaking the recent low. A break into the high 40s..should open up a 20% move lower.

*Tim Knight on Slope of Hope seems to be more focused on GDX than anything else lately - especially as it relates to his infamous analogue.Can the miners really lose 50% in the near much-touted 'doomster wave'?  Certainly, if Sp'1000, then GDX should at least briefly break into the high 30s.. 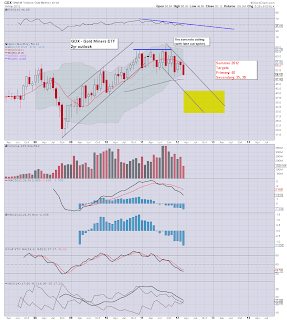 We have a VERY good ceiling in place, and we are without question in a state of rollover since last winter. Primary target zone is somewhere around 40, maybe as low as 30. It would seem unlikely we can break below 30, baring some serious deflationary wave - and we know the Bernanke would want to launch QE3 if that looks likely.

The miners remain my favourite stocks, they are real companies that do actual 'real work'. In the long run, mining stocks - especially the bigger ones, look like the best long term holds. Yet, it is pretty simple, in the immediate term....

If $ UP, then metals weak...and if that is the case...then the miners will get whacked!