AMZN - which way will it break?

AMZN looks set for a decisive move, one way or the other. 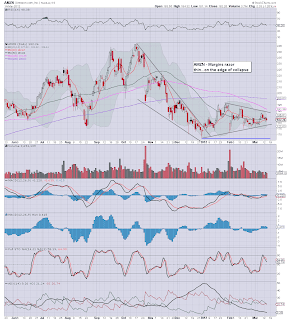 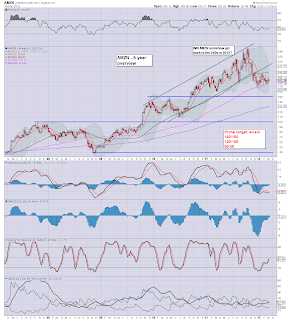 A few weeks back in the first of my 'fair value' series, I noted AMZN as a great company for the longer term, but it has real problems right now with profit margins that are too thin.

So, which way? With SP' already around the 1400 level, AMZN has largely failed to participate in this recent up cycle. AMZN could easily be putting in a bearish pennant right now, and if we do break below 175, then the next level is 150.

The bulls could justifiably suggest that AMZN will at least back test the broken trend/channel -as high as 220 in the coming months. If Sp'1450/1550, then such a target would be very viable. The weekly MACD momentum (blue bar histogram) has been crawling higher for many months now, but it is still in a negative cycle, and could just as easily start slipping lower.

$100 would be unthinkable to many, but it is my baseline 'fair value' target -everything else remaining the same, and it is certainly the target to aim for, if $150 fails to hold.