Lets take our regular look at six of main US indexes 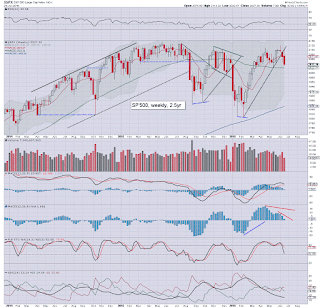 Underlying MACD (blue bar histogram) ticked lower for a third consecutive week, and is set to turn negative - with a bearish cross, at next Monday's open. 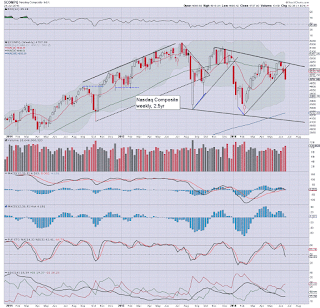 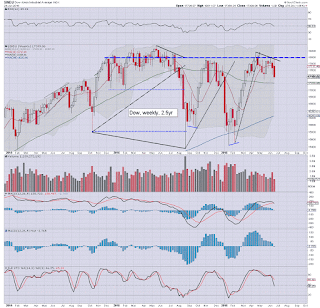 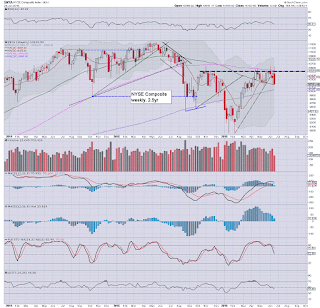 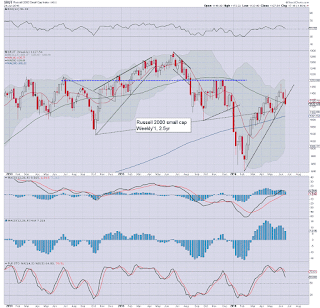 The second market leader - R2K, has followed other indexes, and broken rising trend, settling -1.5% @ 1127. At the current rate of decline, there will be a weekly MACD bearish cross in six trading days - July 5th. Next soft support is the May low of 1085.. almost 4% lower. From there, the 1050/40 zone in first half of July. The giant monthly cycles are offering mid term capitulation in the 800s. 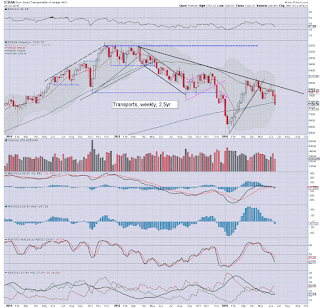 A very bearish weekly close for all US equity indexes.

The weekly candles are of the bearish engulfing type, all have spiky tops, which is highly indicative of another failure by the equity bull maniacs to break decisively upward.

Further powerful downside looks highly probable next week, on the order of 3-4%.

Another busy week is ahead, not least as the market will still be reeling from the UK vote.

*Yellen, Carney (BoE), Draghi (ECB), and Tombini (BoB), are having a little central banker get together in Portugal, and that will likely get considerable TV coverage in the morning.

*Bullard is appearing in London around 2pm, at a dinner function of the society for business economists.

Thursday is June 30th, and there will be some end month/quarter trading issues. Vol' will likely be higher, and price action will tend to be more dynamic.

The following Monday will be July 4th, when the US market will be closed. Friday trading will tend to be somewhat lighter.. and that will likely favour the equity bulls.
--


If you have valued my 11000+ posts across the past four years, you can support me via a subscription, which will give you access to my ongoing intraday posts. See HERE for details.