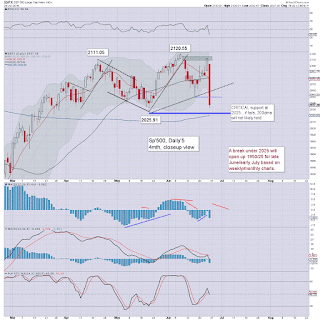 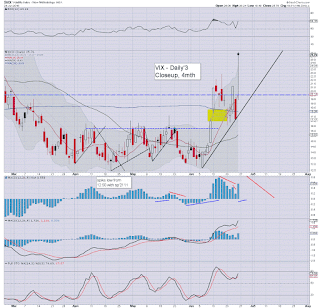 The Thursday close teased the bull maniacs with a viable gap to new historic highs on a 'remain' vote... but no, instead the UK populace voted to leave the EU.

The BREXIT has resulted in a massive reversal, with the market swinging from sp'2113 to 2032. The key low of 2025 looks set to be broken under next week.

VIX is showing some hyper upside power, although in the scheme of things, the 25s are still relatively low, 30s look a comfortable upside target next week. 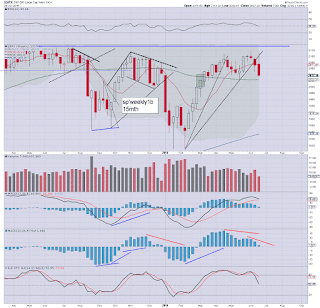 The weekly candle is important to reflect upon, as we have a massive spiky top, highly indicative of an epic failure to break up and away.

Underlying MACD (blue bar histogram) cycle is set for a bearish cross at the Monday open, and by default.. that is suggestive of more powerful downside next week. The lower bollinger band will be in the 1920/30s next week... and is a very valid target.

*the weekend update will appear Sat' @ 12pm EST, and will fully detail the US weekly indexes
Posted by Trading Sunset at 00:00:00
Email ThisBlogThis!Share to TwitterShare to FacebookShare to Pinterest
Newer Post Older Post Home