The communists should be concerned

The Chinese equity market continues to struggle, with the Shanghai comp' starting the week with a rather powerful Monday decline of -2.8% @ 2832. Unless the communists leadership can 'inspire' a break back above the 3K threshold, the 2300/200s are seemingly due this summer. 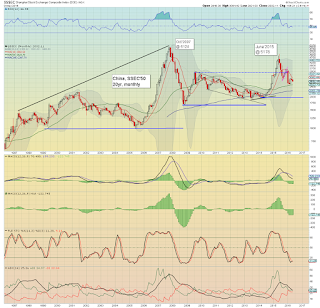 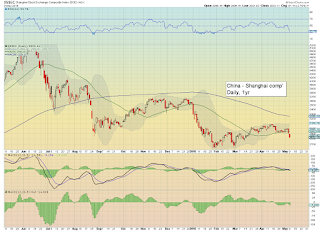 The Monday chatter in Asia was that some high level Chinese official was touting no more easing. That sure didn't help sentiment, resulting in a second consecutive powerful daily decline. The 3000 threshold is increasingly solidifying as core resistance, with the Shanghai comp' unable to break/hold above the key 10MA (3082).

There is no doubt the Chinese communists leadership will increasingly target anyone who dares question the veracity of economic data, or who forecast a lower equity/commodity market.

Anyone who knows their history of course, should recognise that such persecution and scapegoating will do nothing to change the reality. The reality being one of an overly leveraged financial system... one which is many times worse than the US property bubble of 2005-08.

Tuesday will see Wholesale trade data.... but that is it.
--