It was a very mixed week for US equity indexes, with net weekly changes ranging from +1.5% (NYSE comp'), +0.5% (sp'500), to -0.6% (Nasdaq comp'). Near term outlook offers significant cooling into end month, but that won't likely be enough to rule out another push to new historic highs in May. 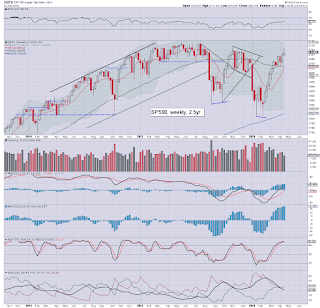 The closing weekly candle is a little spiky... and offers a hint that next week offers opportunity for sig' downside, at least to the 2065/61 gap zone.

First key support are the two soft lows of 2039/33. Any break into the 2020s would be provisionally suggestive that we have a mid term high of 2111.

However, if the market settles April near/at the highs, it would bode strongly in favour of new historic highs in May.. and that would negate what remains of the broader bearish outlook.
-- 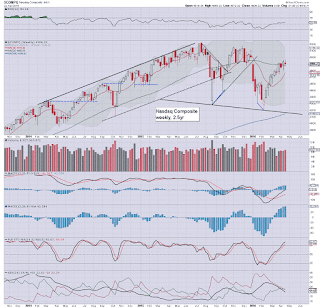 With a wheel barrow of bad earnings from the likes of MSFT and GOOGL, the tech' was the weakest sector/index this week, with a moderate net decline of -0.6% @ 4906. There is huge resistance at the giant psy' level of 5K. Equity bears need a weekly close <4800 to offer some initial clarity that the bulls have again been faked out, with another marginally lower high. 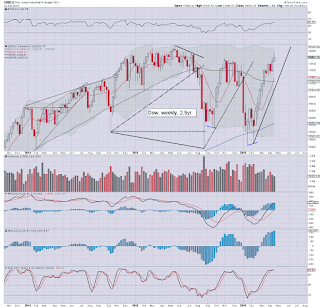 The mighty Dow gained 0.6% @ 18003, with a notable new cycle high of 18167. The weekly candle is a little spiky, and offers threat of significant cooling into end month. Equity bears need a break back under the 17K threshold to have clarity that much lower levels are due in the months ahead. 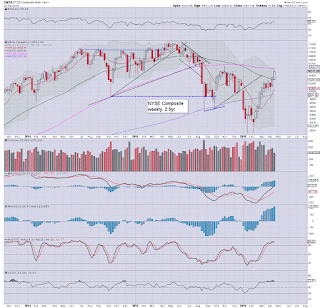 The master index gained 1.5% to the 10500s. There is strong resistance in the 10600s. Equity bears need a break back under the 10K threshold before there can be renewed confidence in the broader bearish scenario. 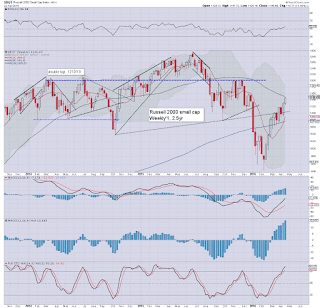 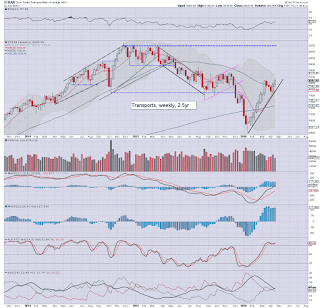 Unquestionably, it was another week for the equity bull maniacs, as all indexes broke new multi-month highs.

There remains a disparity between the headline indexes - sp'/dow/nasdaq, and the NYSE comp'/Trans'/R2K.

Equity bulls can sustain cooling of 3-5% into early May, and it won't wreck the current upward trend from the Jan/Feb' lows.

In contrast, the equity bears need to not only see cooling, but then contain an inevitable subsequent bounce... and achieve a marginal lower high (<sp'2111). That would likely take at least 2-3 weeks to play out.

What does seem clear, we remain on the edge of a very big move.  Either the bull maniacs are about to achieve a massive breakout that will extend many months... or the equity bears will drive the market lower.. breaking new lows this summer/autumn.

The FOMC will issue a press release at 2pm, with a Yellen press conf' around 2.30pm, which will likely last an hour.

re: GDP: market consensus is for weak growth of just +0.7% (Q4 1.4%). A recessionary number seems somewhat unlikely. In any case, the cheerleaders will have to face the fact that the US economy is struggling. They would likely then try to spin it as a bullish sign that another rate increase won't happen until the autumn/winter.

As Friday will be month end, expect increasingly dynamic price action into the close.
--