Has the USD floored in the DXY 93s?

Having formed a clear double top at the DXY 100 threshold in Nov'2015, the USD has seen a great deal of chop, but leaning to the downside. Having cooled 7% across five months, from a pure cyclical perspective, there is now threat of a push higher, not least with the BREXIT vote in June. 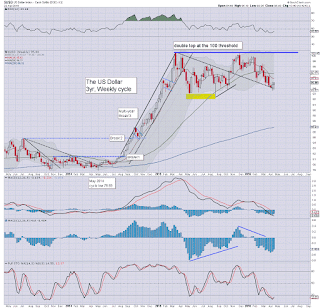 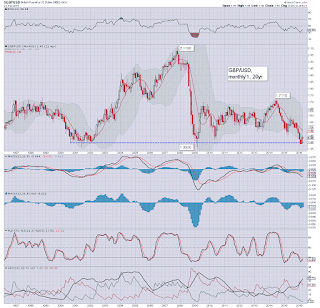 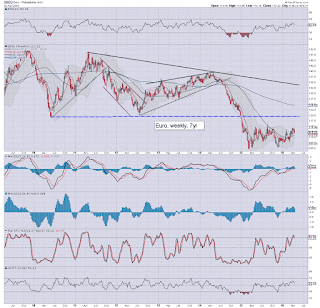 Weekly MACD (blue bar histogram) for the USD is ticking upward, at the current rate, we'll see a bullish cross in 5-6 weeks.

The UK vote on whether to leave or stay in the EU is June 23rd. It will be a pretty damn important vote, with huge economic and societal implications.

Best guess: the UK populace vote to STAY within the EU.

Why? Think back to the Scottish independence vote. Even though the Scots waited centuries for a vote to regain their independence, when it came down to it.. they were conservative minded.. and stayed.

There is clearly a very significant number of the UK populace who are mad as hell about anything related to mainland Europe... but its still not a clear majority.

Indeed, across the last 15-20yrs, the UK - esp' southern England, has become extremely closely tied with mainland Europe, for business.. as well as for tourism.

If I'm correct in thinking the UK vote to stay, the UK Pound would rebound, along with the Euro.... with the USD cooling. The implications of a weaker USD would be very bullish for most world equity markets. Further, the precious metals and Oil would likely soar.

*the weekend post will be on the US weekly indexes
--

For those in the mood for some fed/economic chatter... this is superb.
Posted by Trading Sunset at 04:00:00
Email ThisBlogThis!Share to TwitterShare to FacebookShare to Pinterest
Newer Post Older Post Home