US equity indexes closed broadly weak, sp -3pts @ 2087. The two leaders - Trans/R2K, settled lower by -1.2% and -0.7% respectively. Near term outlook offers increasingly dynamic price action, with a very realistic decline to the sp'2040s - along with VIX spiking into the upper teens. 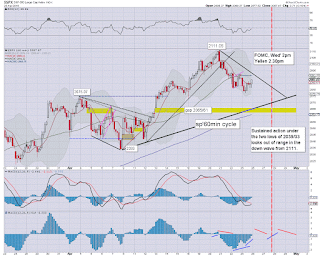 Certainly, not the most exciting of starts to the week, but then, with each hour closer to the FOMC announcement (Wed' 2pm).. the market is increasingly inclined to move into a holding pattern.

The lower gap zone of sp'2065/61 remains a starter target for the bears, and frankly.. considering the daily/weekly MACD cycles.. a move to the 2040s looks realistic for the weekly/monthly close.

I see just a few out there talking about the 2030/20s in the near term.. and I'd agree, those levels look a stretch, even given a few days into early May.