Eyes on the weekly charts

Having seen an effective 50% bounce-retrace (sp'1947) of the 2081/1812 wave, it was a pretty rough day for the US equity market, with the sp -36pts @ 1903. Far more important though is the state of the weekly cycles. From a pure cyclical perspective, the market arguably still needs to churn for another few weeks. 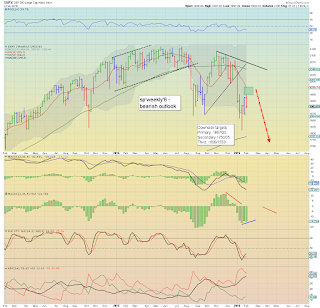 With a very significant net daily decline, the weekly candle has flipped from blue to red.

Underlying MACD (green bar histogram) cycle remains on very low side, and even if the market can battle upward to the sp'1970s, we'll not see a bullish cross until March.

A failure to see the MACD (black line) re-take the zero threshold is something equity bears should be seeking. The biggest declines in any cycle (whether nano 5min, or giant multi-year bear markets), is almost always when we have an initial down wave, a bounce, and then a much stronger secondary wave.
--

The following chart is highly speculative, but the pattern IS clearly similar, and if the analogy is to be used, this is not Jan'2008, we're in the equivalent of July/August. 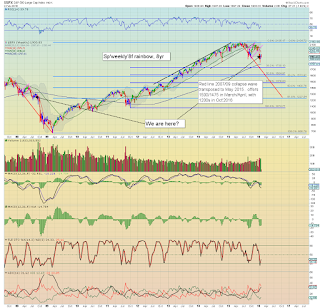 Every market cycle is unique of course, but in theory, we should break the sp'1812 low by late March.

Something to be on the lookout for are a few names in the oil/gas/mining sector to file for bankruptcy this spring. Industry capitulation is still due.
-- 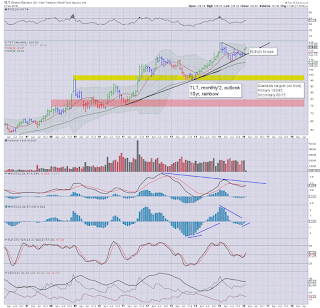 The January close was a clear bullish break, and we're already in the 129s. Now its a case of whether the Jan'2015 high of $134.80 is broken above. Considering the bearish equity outlook into the spring/summer, TLT in the 140/150s is a viable target before bond prices max out.