The last FOMC announcement of the year will shape the remaining nine trading days of 2013, and also the first few weeks of 2014. Mr Market has come to only care about whether the QE fuel continues or not. No doubt...the Bernanke is more than aware of this. 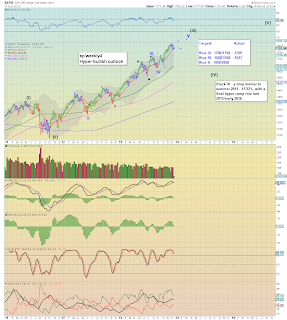 So..the market is again a little weak, but did manage a marginally higher low of sp'1777.

For the bears out there, we have a VIX that is creeping higher, and if the market is genuinely spooked by the Fed tomorrow, then VIX 20s would be briefly viable, along with a hit of the 50 day MA - in the mid 1660s.

As it is..my best guess remains that the market will cope with a 'no-taper' decision, and then settle into moderate end year upside melt.

Tomorrow will be the last major trading day/event of 2013.  The FOMC announcement is at 2pm, and we have the Bernanke doing his very last press conference as Fed chairman shortly after.

*next sig' QE is not until Thursday.
-

One thing is for sure, tomorrow won't be dull. and the market will likely pick a clear direction (before the close) and then stick with it for some weeks, taking us into 2014.

The topic is 'themes for 2014', and for those with an interest in the bigger macro-economics issues, it is well worth hearing.
Posted by Trading Sunset at 04:00:00
Email ThisBlogThis!Share to TwitterShare to FacebookShare to Pinterest
Newer Post Older Post Home