The market bulls made another play to break/hold above the 50 day MA of sp'1624, but again failed. Certainly, the closing hour mini-ramp helped negate the moderate declines to 1606, but the daily candle makes for the second bearish spiky top this week. 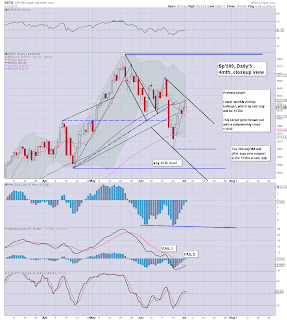 Certainly, today wasn't a 'great victory' for the bears. In many ways, bears are merely - so far at least, able to contain the recent ramp from 1560, keeping the market restrained under the old channel support (better seen on the weekly charts).

*see MACD (blue bar histogram) cycle, I think we might have an important 'fail 2'. We'll know by the Friday close, if we're consistently trading back <1600.
--

What is clear, if the bulls can't break >1624 this week, it does seem very likely we'll still see another significant wave lower, down to the 1530s by mid-July. That in itself will make for a far better 'go-long' buying level.