3pm update - capitulation into the weekend

Bears remain utterly powerless in the face of an equity market that is now the only refuge for capital. Weekly index charts have briefly already flipped to outright bullish, and there looks to be easy upside to the sp'1650/60s next week. Ironically, only the Bernanke can ruin the bulls next week. 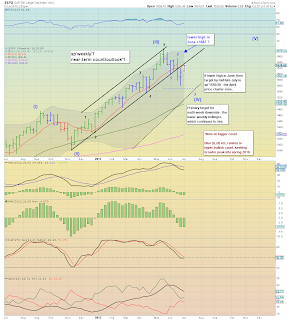 The 'rainbow' (Elder Impulse) candle flipped to green earlier - with a break over the weekly 10MA, and for me, that's all I needed to see.

I'm out, having now exited a heavy-short position.
-

There is significant risk of a Monday gap higher straight into the mid 1640s, and that will make the 1650/60s an easy hit by next Wednesday.

There is similarly the real risk that Bernanke will upset the cart again - as he did May'22 and the more recent FOMC.

As things are, daily charts are outright bullish, pointless to still be short now. Utterly...pointless.
--
A lousy end to the week.

Bulls are surely going to get a weekly close above the 50 day... 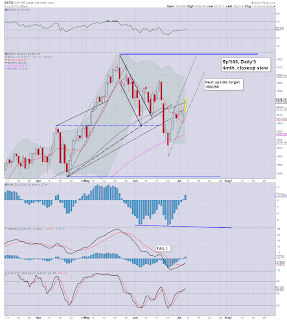 Yet, even if they don't, the laughable thing is that they are STILL going to close the week, net higher anyway.
-- 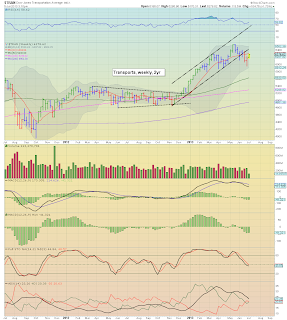 
3.25pm...a little wave lower, but it does nothing to negate the underlying strength on the daily charts..


3.36pm..so, thats almost it for another week in the worlds most rigged casino.

As noted, Bernanke is the one wild card for the bulls next week. So long as he doesn't spook the market (again), we'll just keep rallying, perhaps all the way into early August - when Armstrong has a key ECM cycle turn.

Regardless, I'm out..for now. A lot to consider over the weekend.


3.43pm... 5pts down in 60mins..but 3pts up in 3mins....sums up what the bears face EVERY single damn day.
--
Posted by Trading Sunset at 19:55:00
Email ThisBlogThis!Share to TwitterShare to FacebookShare to Pinterest
Newer Post Older Post Home