The main indexes saw new highs broken earlier in the day, but slipped a touch lower into the close. Most notable event of the day, the R2K hitting 1000. Primary trend remains relentlessly to the upside, fuelled by QE, and aided by those 'we love low volume' algo-bots. 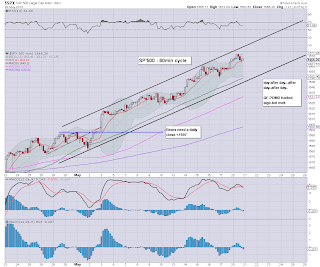 I'm aware of a quite a few who were particularly annoyed by today, not least those in the metals community.

How many were exiting long positions on big losses at the open, only to then see Gold/Silver (and Oil too) all ramp into the afternoon? It remains an incredibly frustrating market, not least to those who believe a 'significant' pull back is viable in the near term.

*I remain on the sidelines, looking to go long Oil/Silver early Tuesday.
--
Posted by Trading Sunset at 21:01:00
Email ThisBlogThis!Share to TwitterShare to FacebookShare to Pinterest
Newer Post Older Post Home